The legend of Swimrun – the ÖtillÖ Swimrun World Championship – receives thousands of applications each year from aspiring adventurers longing to challenge themselves in what has been crowned the hardest one-day endurance race on the globe. The 75km-course across the Swedish archipelago, of which 10 is swimming in the open Baltic Sea, is not for the faint hearted. But that doesn’t mean it’s only for men.

The ÖtillÖ Organization handles applications fairly, meaning that the starting spots are distributed equally towards each category (men, women and mix) according to the relative percentage of the number of applicants in each class. This year, the following was the distribution:

Ranking selection based on the standings in swimrunranking.com:

For the Directors choice selection:

We could go on all day contemplating reasons for this distribution, but there’s another time and space for that. All we know, is that WILD Swimrun wants to help put some more weight on the light side of this scale. The only way more women’s teams can earn spots, is for more women to apply! Therefore, as a first step, we’d like to clarify the sometimes confusing qualifying rules on how you can earn a spot in the Swimrun World Championship, and which way is the easiest for a women’s team to make the cut.

Ranking: for the safe planner

Swimrunranking.com is the ranking used by the ÖtillÖ Organization to count points from all their own races, as well as their connected Merit Races. This system is used to determine spots for the ÖtillÖ World Championship in retrospective (up to 24 months back from the date of selection).

The exact number of spots that are allocated in this category can vary from year to year, but it is the largest group of qualifications offered (this year, it was 58 Teams) and therefore the safest way to earn a spot as you can control how many points you earn as a team by doing many races.

The World Series Standings: This is a yearly (calendar year) “cup” – like a world cup – which generates a world series winner at the end of the year. This World Series ONLY includes the World Series Races, not the Merit Races and not the World Championship.

Direct Qualification: for the risk taker

At each ÖtillÖ World Series Race, you have the opportunity to qualify directly to the World Championship. The Women’s Category has two qualifying spots for the two fastest teams at each race (the long World Series Race only).

If you think you have a shot, this is a good way to qualify quickly and to have a safe spot early on.

Keep in mind, that in most cases, you don’t have to finish as number one or number two. The top teams (sometimes as much as five or six teams!) usually already have a spot for the World Championship due to placement the year before or qualifying at another competition. In this case, the World Championship spots roll down to the next finishes. “Every year so far, we’ve had to chase down to the last team that finishes in Engadin to fill the women’s slots.” states the ÖtillÖ Organization. Ladies, this means the chance of qualifying is real!

Important: you cannot get a spot to the World Championship if you or your partner already have one with another person! Make sure the one you’re competing with is “free” or that the person that has the spot in another team declines it before you start.

Director’s Choice: for the wild cards

In case you are planning to do the World Championship for a greater cause, you have a celebrity on your team or have some other curious talent, you should apply for the Director’s Choice spots. These are quite few, and the reasons for entry are unknown and to the discretion of the race directors. They decide who gets these spots. However, it is in their best interest to have a gender equal sport (so ultimately, half of the spots should go to women one day!).The more original, the better, should be what to go for in this application process.

You apply at the same time, usually in December-January, and get to know the result in February.

In 2017, the ÖTILLÖ organization started the 7/24 concept. Until date no one has been selected under this criteria yet but we suspect there will be a handful of teams in July.

The 7/24 concept is a guaranteed way of getting a spot at the Swimrun World Championship. You and your team mate have to race 5 World Series races & 2 Merit races in 24 months. It can be any of them and it can also be the same races two times. All you have to do is finish them. Then you apply and you will get a guaranteed spot. This way will also put you relatively high in the ranking which will allow you to apply in that category too.

Who’ll join us in our mission to get more women in the World Championship? Don’t worry, we’ll make sure to remind you when it’s time to apply! 😉 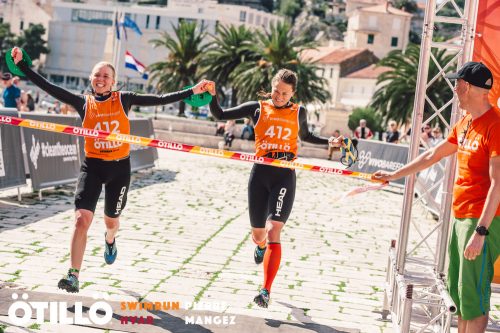